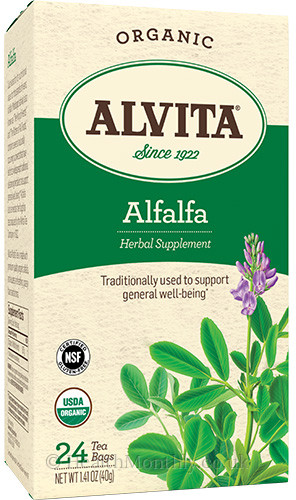 Alvita Alfalfa Tea is made with premium-quality, organic alfalfa, and exudes a refreshing, grassy flavor and aroma.

Cultivated for its nutritional value for thousands of years, alfalfa (Medicago sativa), also known as "The King of Herbs" and "The Father of All Foods", contains several naturally occurring nutrients that have led to its widespread traditional use among herbalist to support general well being. Alfalfa also served as the flagship tea produced by the Alvita Tea Company in 1922.

Alvita Alfalfa Tea is made with premium-quality, organic alfalfa, and exudes a refreshing, grassy flavor and aroma.

In 1922, a new era for tea consumption began in America. The herb alfalfa, long known for its beneficial nutrients, was packaged in tea bags and sold to an emerging health food market. This product became known as Alvita and set the standard for future herbal teas. Today, Alvita represents more than forty single-ingredient teas, each one uniquely distinct, just like the individuals who drink them.

Alvita chooses only the highest quality organic, wild-crafted, or cultivated botanicals, perfectly prepared to provide you with the best Mother Nature has to offer. Historical and scientific literature is painstakingly studied to ensure that the correct traditional plant and most appropriate servings are used, delivering premium flavor and quality.

Herbs are gifts from the earth. Alvita takes its stewardship seriously by offering carefully harvested teas in earth-friendly packaging. Our beautifully illustrated boxes are made using recycled paperboard and our English, pillow style tea bags are oxygen bleached, not chlorine treated. You won't find a better product, with a cleaner package...anywhere.

Alvita...brewed with confidence, steeped in tradition.

Alvita Tea was founded on integrity of their products. Their teas may start with science but end with taste. They strive to build trust and loyalty and earn your repeat business.