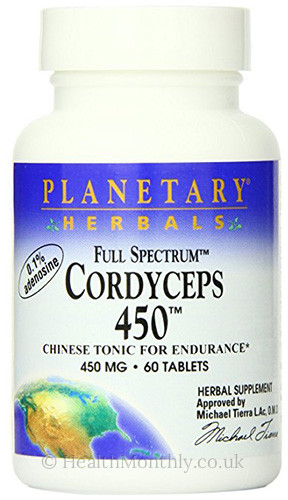 In China,Cordyceps sinensis is recognized as a premier tonifier for athletes and anyone wanting to support energy and endurance. Planetary Herbals Full Spectrum Cordyceps 450™ provides the same amount of cordyceps (standardized to 0.1% adenosine) used in clinical studies.

Planetary Herbals Full Spectrum Cordyceps 450™,Original Chinese Athletic Performance Formulas.
Cordyceps (Cordyceps sinensis) is one of the most valued tonics of ancient Chinese herbalism. According to traditional Chinese texts, cordyceps was used for the purpose of "strengthening the energy of life," and in particular to "build the gate of vitality." Today it is widely gaining recognition as a premier tonifier of world-class athletes. Cordyceps recently received wide attention when Chinese runners, after taking this traditional ingredient, broke the 1,500 and 10,000-meter long distance world records, both within a short period of time

Several expert herbalists played their part in making the dream of creating Planetary Herbals a possibility, whom predominantly focused on creating natural medicines that did not contain any additives or harmful elements.