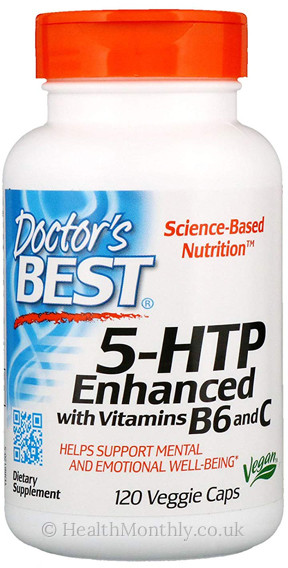 Doctors Best brings you a dietary supplement which can boost mood, support healthy eating and help regulate sleep. Doctors Best 5-HTP Enhanced with Vitamin B6 + C works to support serotonin production the brain which is responsible for emotional wellbeing.

5-HTP is the abbreviation of 5-hydroxy L-tryptophan or 5-Hydroxytryptophan which is an amino acid used by the brain to convert into serotonin, a neurotransmitter which supports the movements of signals between neurons in the nervous system. Although 5-HTP may be formed from the protein tryptoplan found in foods such as milk, meat, some greens and potatoes, it is only in very small quantities. In dietary supplements a more concentrated form can be used and is commonly extracted from the seeds of the Griffonia simplicifolia shrub native to parts of Africa which produces green flowers followed by black pods.

The formation of 5-HTP in the body is supported by the enzyme tryptophan which can be hindered if conditions are altered in the body, such as vitamin B6 or C deficiency. Vitamin B6 also helps the conversion of 5-HTP into serotonin and vitamin C supports the conversion of tryptophan into 5-HTP and tyrosine to norepinephrine (another neurotransmitter). 5-HTP also crosses the blood-brain barrier whereas tryptophan can often be utilised elsewhere. Therefore supplements containing 5-HTP are often combined with vitamin B6 and C and is a more convenient and direct form of supporting 5-HTP and serotonin production in the body.

5-HTP supports the production of serotonin in body which has an important function in reducing blood loss when it is released from blood platelets, supporting the digestive track and in the brain where it acts as neurotransmitter. It is thought that orally consumed 5-HTP is readily absorbed by the gastrointestinal track (up to 70%) with the rest then utilised in the blood stream.

Taking a regular supplement of 5-HTP enhanced with vitamin B6 and C is thought to have the following benefits to health:

What is the recommended dose of Doctors Best 5-HTP Enhanced with Vitamin B6 & C 315mg?

Doctors Best recommends that one 315mg capsule is taken one to three times a day with or without food.

Natural therapies carry a risk of contraindications when combined with various medical treatments and conditions. Doctors Best 5-HTP Enhanced with Vitamin B6 & C 315mg should not to be used by anyone using MAO inhibitors, selective serotonin reuptake inhibitors (SSRIs), or other anti-depressant medications. Also if you are taking any medications known as "triptans", this supplement should not be taken.

Not suitable for children.

In clinical students some users experiences nausea, vomiting and diarrhoea which tend to lesson over time. If you are concerned, speak to your health practitioner.

Doctor’s Best is a well respected nutritional supplement company. They make sure that they thoroughly research every ingredient they use in their products to ensure that the customer gets the best value for their money. Learn more about Doctor's Best.