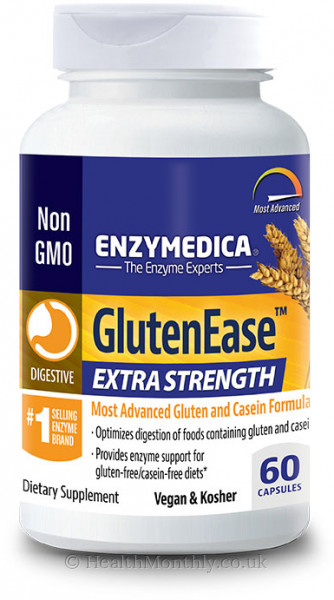 GlutenEase Extra Strength contains Protease Thera-blend (G2) enzymes along with DPP-IV activity for providing more than double the digesting power for foods containing gluten and casein compared to GlutenEase. Starch-digesting amylase enzymes assist in the digestion of the carbohydrate portion of grains, such as wheat, which contain gluten.

Many people have difficulty digesting gluten and casein proteins commonly found in foods, resulting in discomforts like occasional gas and bloating. Gluten is the main protein complex primarily found in grains including wheat, barley, spelt and rye. It may also be present in medications, processed foods, soaps and cosmetics. Casein is found in dairy products and processed foods. Even those on gluten-free/casein-free diets may experience difficulties due to cross-contamination from offending foods.

According to one U.S. survey, 1 in every 3 adults is reducing or avoiding gluten consumption. The study conducted over a three-year period shows a consistent increase in gluten-free popularity, which may suggest a high prevalence of gluten intolerance.

Although the popular solution for gluten and casein intolerance is following a gluten-free, casein free diet, eliminating the offending proteins to reduce discomfort is only effective in the short term. Once those foods are reintroduced, symptoms return. As a complement to elimination diets, enzyme supplementation may assist and enhance the digestion of foods containing gluten and casein.

GlutenEase Extra Strength combines the Protease Thera-blend (G2) enzymes along with DPP-IV to provide more than double the digesting power for foods containing gluten and casein compared to GlutenEase. Proteases high in DPP-IV activity assist in encouraging healthy inflammatory responses to gluten and casein peptides, thereby better digesting and utilising gluten and casein containing foods. The amylase Thera-blend enzymes included assist in the digestion of the carbohydrate portion of grains, such as wheat, which contain gluten, while the glucoamylase breaks down polysaccharides into glucose units.

Thera-blend is an exclusive process that combines multiple strains of enzymes that work in various pH levels. Thera-blend enzymes have been shown to be three times stronger and work more than six times faster than leading digestive supplements.