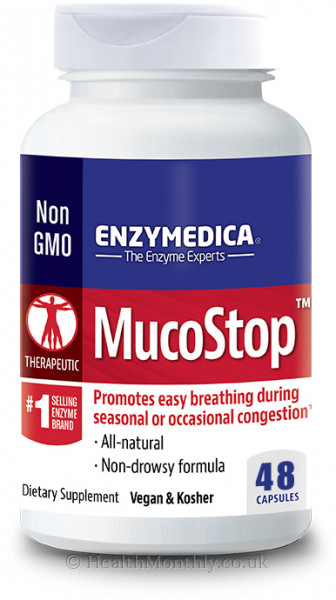 MucoStop contains a blend of enzymes specifically formulated to promote easy breathing. The high-potency enzyme Mucolase assists the body's natural ability to break down and eliminate excess mucus in the sinus and nasal passages.

Mucus is defined as a clear, viscous secretion from the mucus membranes and glands, consisting of water, various salts, exfoliated cells and white blood cells. In more general terms, mucus is a beneficial protein created by the body to protect vital organs and bind up pathogens for removal from the body.

There are many things that can cause excess mucus and hinder upper and lower respiratory function. Among these are cold temperatures, changes in season, allergic reactions and medications. Encouraging removal of excess mucus may lessen the discomforts commonly associated with seasonal or occasional congestion.

Enzymes are highly specific in terms of what they act upon and what they do. Proteolytic enzymes break down proteins. But not all proteases can break down all proteins. For example, a protease that effectively digests food protein will not be effective at breaking down mucus protein. To break down mucus, an enzyme that is classified as both proteolytic and mucolytic is required.

Mucolase is a high-potency proteolytic enzyme that has mucolytic properties, meaning it targets and hydrolyzes excess mucus. Mucolase assists the body's natural ability to break down and eliminate excess mucus in the sinus and nasal passages, which may support immune health.

Protease and amylase are also included to assist in overcoming the challenges often associated with seasonal or occasional congestion.

MucoStop contains Thera-blend enzymes. Thera-blend is an exclusive process that combines multiple strains of enzymes that work in specific pH levels, resulting in superior performance in the body.