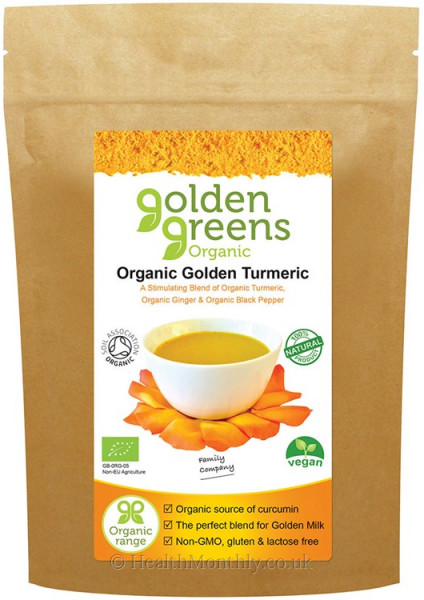 Organic golden turmeric is natural, organic source of curcumin. Special blend with organic ginger and black pepper to enhance absorption. Perfect for making turmeric latte and golden milk. Golden turmeric is a special blend of organic turmeric with organic ginger and black pepper. Turmeric has also been used for thousands of years in Ayurveda, the traditional medicine of India. It is suitable for vegetarians and vegans. Available in 100 g pack.

organic Golden Turmeric… Is a special blend of Organic Turmeric with Organic Ginger and Black Pepper. Turmeric has been used for thousands of years in Ayur-Veda, the traditional medicine of India, and has recently been the focus of the BBC's 'Trust Me I'm A Doctor'.

Professor Widschwendter who lead the BBC's study, at University College, London, looked at the effect of turmeric powder and turmeric capsules on subjects' genes, the results are fascinating...

While taking a teaspoon of turmeric powder every day, mixing it into yogurt or a glass of warm milk had a measurable effect, taking turmeric capsules had no effect at all.

Experts think that it's cooking with turmeric that makes it more digestible - allowing the curcumin to be easily absorbed, especially when it's mixed with black pepper and oil.

Greens Organic Fact: Did you know that Turmeric is currently being studied for it's potential effects on both Alzheimer's and diabetes.

Golden Greens has been a powerhouse natural health and wellbeing industry for a long time. The founders of the company are Morris Ahmed and Nicky, both of whom are vegetarians, which is why they both realize the importance and benefits of greens. Learn more about Golden Greens.
Everyday Low Price 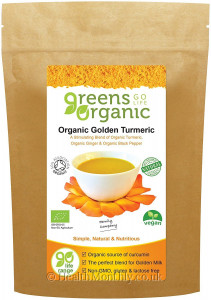