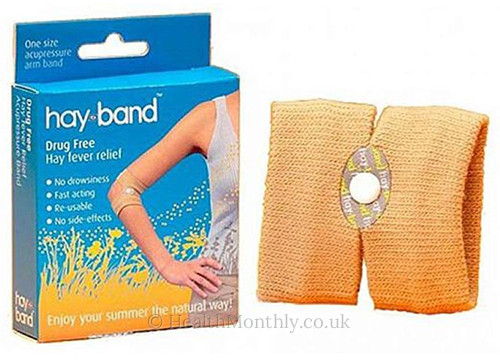 Hay-Band is a drug-free alternative for treating Hayfever. This product uses acupressure to help relieve the many symptoms of Hayfever. This natural method of treating these allergies have been used for centuries. This product stimulates the LI-11 pressure point in the arm which is done to aid relieve of the symptoms of many allergies, including Hayfever. Hay-Band provides season long relief and causes no drowsiness, is fast acting, re-usable and has zero side effects. This band comes in a standard size and is suitable for use by both adults and children.

Acupressure works in a similar way to acupuncture but does not involve the piercing of the skin in any way. Instead, the pressure points are stimulated from the outside - a technique which has been a part of Chinese medicine for 4,000 years.

Chinese traditional medicine believes that a person's health is governed by the free flow of energy (known as "chi") through the body. This energy flows through channels or meridians around the body and along these meridians are many pressure points.

It is believed that an illness or other condition is due to a blockage or disruption in the flow of energy along the meridians within the body. Stimulation of the pressure points helps release the blockage so allowing the energy to flow freely and return the body back to it's natural balance.

Each pressure point is believed to be related to specific parts of the body so a different point would be used to help treat a headache and other symptoms.

In the case of the "Hay-Band*", the acupressure point stimulated is the LI-11 also known as the "QuiChi" point.

The Hay-Band* is exclusively manufactured by SCD Ltd. SCD Ltd is a company which has been manufacturing acupressure products for over 20 years.