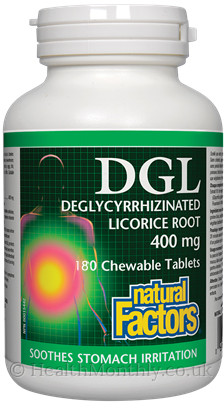 DGL stimulates and/or accelerates the factors that protect against ulcer including increasing the production of mucin - the protective coating in the stomach and intestines.

DGL stimulates and/or accelerates the factors that protect against ulcer including increasing the production of mucin - the protective coating in the stomach and intestines.

Numerous studies over the years have found DGL to be an effective anti-ulcer compound. In several head to head comparison studies, DGL has been shown to be more effective than either Tagamet, Zantac or antacids in both short-term treatment and maintenance therapy of gastric and duodenal ulcers.

DGL is composed of several flavonoids that have been shown to inhibit H. pylori.

When you are experiencing the discomfort of ulcers or stomach upset, antacids can temporarily inhibit the production of stomach acid, which can ease the burning of sensitive mucous membranes. But this only addresses the symptoms.

Deglycyrrhizinated licorice root extract (DGL) offers a more rational approach by actually promoting healing. Licorice contains antioxidant flavonoids that help heal digestive tract cells. It supports stomach cells that produce mucin to protect the lining of the stomach. It also stimulates the growth of new mucosal cells. The flavonoids in DGL also inhibit a bacterium, Helicobacter pylori, that grows in the stomach and is believed to play a role in causing some stomach ulcers and chronic gastritis (inflammation of the stomach lining).

As mentioned above, DGL is a preparation of licorice from which the compound glycyrrhizin has been removed. In large doses, glycyrrhizin can cause hypokalemia, a drop in the level of potassium in the blood stream. This can lead to hypertension (high blood pressure). These side effects are triggered because glycyrrhizin acts like the adrenal hormone aldosterone, causing sodium retention which results in an expansion of the body's fluid volume and an increase in blood pressure.

Natural Factors have been well established in the natural products industry for over fifty years. They continue to produce high-quality natural products, sourcing ingredients from their own farms, and are one of a few supplement companies who have complete control of their supply chain. Learn more about Natural Factors.