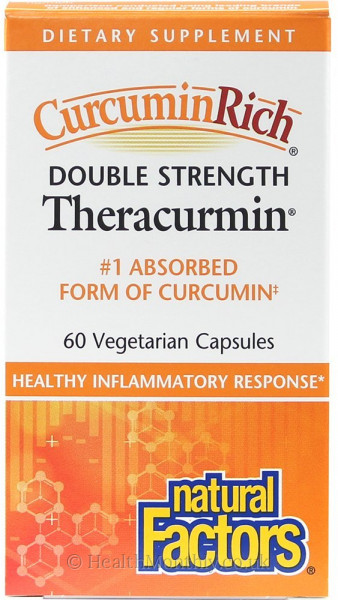 CurcuminRich Theracurmin unlocks the medicinal power of curcumin, the yellow pigment found in turmeric (Curcuma longa). Turmeric is a member of the ginger family, and is the principal spice used in curry. In India turmeric root has been used for thousands of years in traditional Ayurvedic medicine to treat inflammatory conditions.

Theracurmin represents a major scientific breakthrough in curcumin pharmacology, with both animal and human studies showing no side effects and significantly better results than other curcumin preparations. The first step in manufacturing Theracurmin is solubilizing it within a vegetable gum known as gum ghatti. The next step is grinding the curcumin mixture using a wet-grinding mill to produce microscopic particles that are 100 times smaller than regular curcumin powder. A homogenizer then disperses these particles to create a colloidal suspension that readily mixes with water. The combination of reduced particle size and improved solubility ensures that a therapeutically effective level of curcumin is absorbed into the bloodstream, where it lasts for hours.

CurcuminRich Theracurmin unlocks the medicinal power of curcumin, the yellow pigment found in turmeric (Curcuma longa). Turmeric is a member of the ginger family, and is the principal spice used in curry. In India turmeric root has been used for thousands of years in traditional Ayurvedic medicine to treat inflammatory conditions.

When it comes to curcumin, it's not how much you take, but how much you absorb, that matters. Early clinical studies found that large quantities of curcumin had to be consumed because the absorption (bioavailability) of regular curcumin is quite poor. Curcumin is relatively insoluble in water and is rapidly transformed and excreted from the body.

Theracurmin is an advanced formulation that uses proprietary dispersion technology to create microscopic particles dispersed in a colloidal suspension for better absorption. Theracurmin is more bioavailable than regular curcumin powder, ensuring a therapeutically effective level in the blood. Published studies comparing blood levels of curcumin using leading brands confirm that on a milligram-to-milligram basis, Theracurmin is the best-absorbed curcumin product on the market.‡

‡Scientific scrutiny revealed that Theracurmin was more bioavailable on a milligram-to-milligram basis than other leading* enhanced and regular forms of curcumin. *As measured by SPINS 2014 data.

Natural Factors have been well established in the natural products industry for over fifty years. They continue to produce high-quality natural products, sourcing ingredients from their own farms, and are one of a few supplement companies who have complete control of their supply chain. Learn more about Natural Factors.