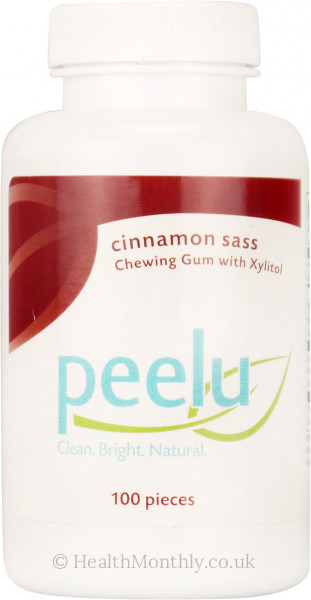 Like gum? Love cinnamon? What if you could have both and keep your teeth sparkling clean all at the same time? Peelu Cinnamon Sass is a fun and gum friendly way to keep your breath fresh and wrapped up in the warming glow of delicious cinnamon.

What is Peelu Cinnamon Sass Chewing Gum with Xylitol?

You only have to walk into any corner shop, petrol station or supermarket to realise that there are a million and one chewing gums available today. Hundreds of flavours, never ending promises and all kinds of sugar free alternatives adorn the shelves and racks of our everyday consciousness.

With so many promises being made, how do we really know who's telling the truth? The problemtrouble is that most chewing gums areis really just candy, however you dress it up.

Peelu Cinnamon Sass Chewing Gum with Xylitol is different - why? Because it uses Xylitol.

Xylitol is a completely natural substance thatwhich is most commonly found in the fibres of vegetables and fruits. So organic is it that it can even be synthesised in small amounts in the body. The main source of most Xylitol is actually corn on the cobs. It is a crystalline, white powder which looks a lot like - you guessed it - sugar.

But guess what - in studies, Xylitol is a far superior alternative to its saccharine second cousin. As it started to enter the popular consciousness, studies from Finland in the 1970s found that when compared to sugar, Xylitol resulted in approximately two fewer cavities or missing teeth per person.

All this benefitsgoodness and it tastes delicious? You better believe it.

What is Peelu Cinnamon Sass Chewing Gum with Xylitol used for?

There is a tendency to think of chewing a gum as a relatively modern concept, - a type of candy invented to deliver an increasingly caloric sugary payload. In fact, humans have been using chewing gum for at least 5,000 years.

Incredibly, you can go back as far as the Neolithic period to find evidence that humans have been masticating on refreshing treats. Ancient Finnish birch bark tar was recently unearthed with tooth prints in it. And not just for pleasure either, - It is believed that the tar from which the gum was made had antiseptic properties.

By 1848, John B. Curtis had begun to sell the first actual 'chewing gum'. he called it 'The State of Maine Pure Spruce Gum'. What's most interesting about this is that the chewing gum didn't start life as candy, rather it was foremost a medicinal salve before it became a treat.

Peelu Cinnamon Sass Chewing Gum with Xylitol takes us back to that time. By using The Peelu Tree Salvadora persica, much as the indigenous people of the Middle East did, this is a creation which embraces the use of the twigs and fibres to create a cleaner, healthier alternative to sugar filled gums.

Many actually believe that the "Kayu Sugi," or chewing stick (made from Peelu),was the world's first form of toothbrush. Fortunately for us, there's no need to chew on bits of old twig, - we can enjoy the cinnamon licked flavour of this delicious gum instead.

What is the recommended dosage of Peelu Cinnamon Sass Chewing Gum with Xylitol?

None apply. Chew at your pleasure!

Peelu's unique fibre-based formulas help brighten and clean your teeth without harsh abrasives. The Peelu tree has been a source of dental health for over 1,000 years due to the natural cleansing properties of the Peelu vegetable fibre. Now Peelu USA is making this non-abrasive fibre available in remarkably effective toothpastes, chewing gum and dental fibres.