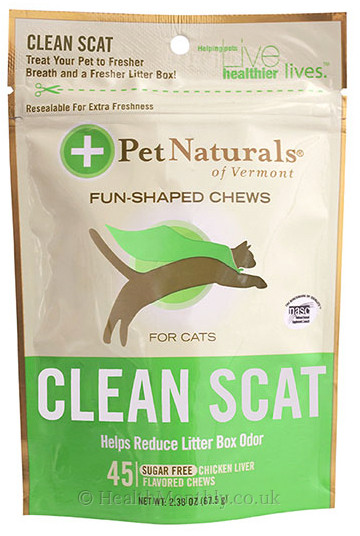 By Pet Naturals of Vermont

Clean Scat is designed to reduce fecal odor in cats and freshen their breath.

Clean Scat is designed to reduce fecal odor in cats and freshen their breath with a tasty chew that cats love! Clean Scat features Champex™ brand Champignon Mushroom, which is extensively studied for its ability to suppress odor-causing chemicals in the intestines.These delicious chews also contain Yucca and spirulina to deodorize while supporting toxin removal. With Clean Scat, your cat will have fresher breath and a fresher litter box!

More than 100 trillion bacteria exist in the intestines including major purifying, odor-creating bacteria, such as welch bacillus and escerichia coli. As the bacteria break down nutrients, foul-smelling compounds are released.

There are two major causes of mouth odors. The first is decay- ing food debris between the teeth on the mucous membrane or in the esophagus. The second is due to foul smelling compounds being absorbed from the intestinal tract and then exhaled from the lungs.

Spirulina is an excellent source of chlorophyll, a biomolecule that helps clean the body of toxins with a beneficial deodorizing effect.

Champignon Mushroom Extract (ChampexTM brand) has been studied extensively for its ability to reduce odors and improve intestinal conditions. ChampexTM attacks foul breath and body odors where they originate - the intestines. By supporting and maintaining a clean condition within the intestines Clean Scat suppresses the generation of toxic chemicals. This helps keep fecal odor to a minimum, which helps reduce litter box odor.

Yucca schidigera extract has been shown to reduce the intensity of fecal odor in cats by either altering the production or decreasing availability of hydrogen sulfide.

About Pet Naturals of Vermont

Humans are not the only ones who might suffer from a variety of health issues. Animals are also prone to having complex medical problems, as well. Pet Naturals produces top of the line wellness and health supplements with a special focus on animals.