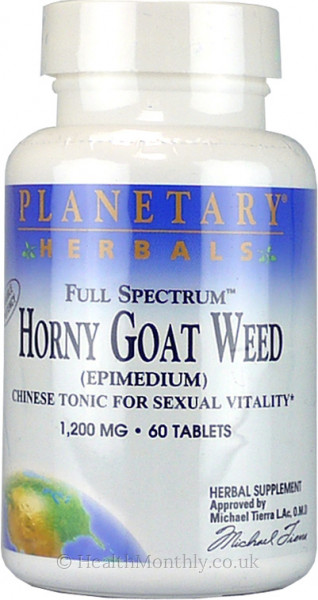 A History of Traditional Use:

Epimedium is one of the most valued tonics of Chinese herbalism. Its first recorded use dates back to the ancient text, Shen Non Ben Cao Jing (ca. 200 B.C.-100 A.D.) It was viewed as a kidney / adrenal tonic, used for male endocrine function, erectile function and enhancement of libido in men and women. Epimedium was said to "tonify life's gate" - a term used to refer to the vital energy responsible for male sexual capability - as well as to strengthen tendons and bones.

Preliminary animal studies suggest that part of epimedium's effects may be due to its ability to stimulate endocrine secretions of a type of androgen. Androgens are substances, such as androsterone and testosterone that stimulate male characteristics.

All Planetary Herbals products are selected or developed by licensed acupuncturist and clinical herbalist, Michael Tierra. A clinician since 1972, Michael is an authority on the world's herbal traditions.

Several expert herbalists played their part in making the dream of creating Planetary Herbals a possibility, whom predominantly focused on creating natural medicines that did not contain any additives or harmful elements.