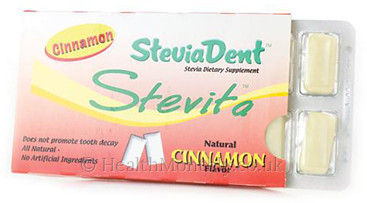 Skip the sugary gums in the checkout aisle at the grocery store, and instead opt for this all-natural gum featuring xylitol and stevia. SteviaDent Cinnamon gum tastes great and does not promote tooth decay.

Steviadent was created by Stevita's founder, Oscar Rodes, as a natural artificial-sweetener-free, and sugar-free gum for his grandchildren. If you're looking for a deliciously healthy stevia-sweetened gum for you and your family, you will love Steviadent stevia chewing gum.

The World's First Table Top Stevia Sweetener
Stevita Naturals' president and founder, Oscar Rodes, was raised on a family farm in Brazil in the early 20th century. Like many in their farming community, Oscar's father was illiterate and poor, and therefore the target of exploitation. He was routinely short-changed and blackmailed by buyers who would wait until the last-minute to procure his crops at the lowest possible price. After watching his father's struggle, Oscar made a promise to change the system by dedicating part of his adult life to protecting the rights, dignity, and interests of small Brazilian farmers. His opportunity came from an unexpected source, the Brazilian stevia plant, a previously little-known medicinal herb which was beginning to gain international interest. In 1987, the extraction facility was built around the farms in Maringa, Brazil, and in 1988 the Stevita brand was introduced as the world's first table top sweetener.