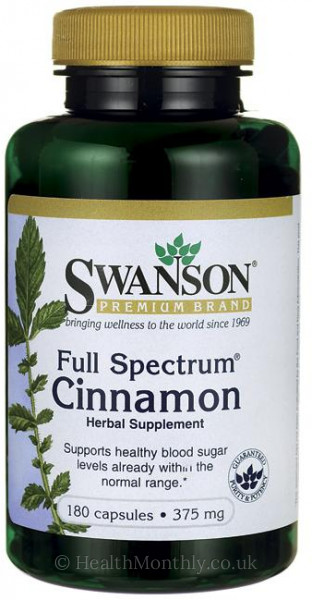 From the dark and mysterious spice markets of ancient Arabia comes this rich, aromatic jewel of natural flavour and, as it happens, antioxidant power too. Fought over for centuries for its mythical appeal, now the healing qualities of cinnamon are here for you to embrace as countless others before you have too.

What is Swanson Full Spectrum Cinnamon?

Known primarily to us for its more usual role in our spice racks and kitchens, Cinnamon is that instantaneously notable spice whose flavour and aroma conjure forth seasonal connotations and are best blended with fruits, curries or even whiskey. Away from all that though this rich spice has a long history, interwoven with stories of adventure, zealotry and slavery.

Chinese cinnamon, or Cassia, as it has perhaps been more prominently known, was first used in 2000 BC by the Egyptians who employed it as a perfuming agent in the embalming process of their dead. It was eventually brought to Europe by Arab traders and its popularity spread exponentially among those affluent enough to enjoy it. Its rarity and the fact that traders brought it west by land meant that it was invaluable to the point that when Emperor Nero's second wife, Poppaea Sabina died in 65 AD, he burned as much cinnamon as he could on a pyre in deference to her great beauty.

It became so sought after that Arab traders were determined to keep its source a secret to protect its value. Stories were abound of it growing high up in bird's nests or deep down in canyons plagued by snakes but the truth would not be discovered until the 16th century when the Portuguese landed on Ceylon (now Sri Lanka). Upon discovering the spice in abundance they colonised the island, enslaving its people and subsequently monopolised the cinnamon trade for the next hundred years.

What is Swanson Full Spectrum Cinnamon used for?

Made by cutting the stems of the cinnamon tree then extracting the inner bark and removing all wood from it, Cinnamon is dried out, upon which it rolls naturally into the scroll like tubes we would recognise today. Once ground, the Cinnamon is ready to consume and aside from its delicious flavour it conceals a host of other benefits.

What is the recommended dosage of Swanson Full Spectrum Cinnamon?

To be used as a dietary supplement. Take two capsules thrice per day with food and water.

Do not take if pregnant or nursing.