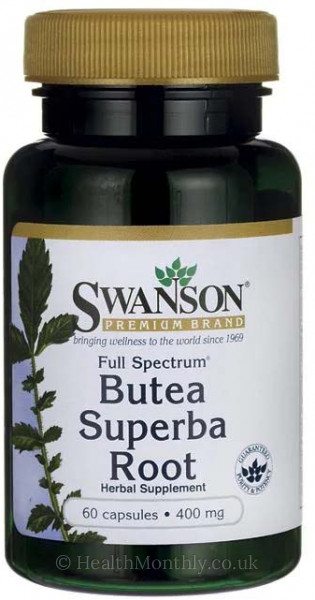 This ancient Thai sexual stimulant is said to intoxicate the mind and body with powerful thoughts of lust and virility. Step inside the mysterious world of 'Red Kwao Krua', as it is known to the locals, and enjoy the benefits of a revitalised libido.

When it comes to the aphrodisiacs, there is often a strange and cruel disparity that occurs between the way the aphrodisiac looks and its actual purpose. This discordance will often give the user cause for hesitation and even indifference. Oysters are a great example (even if they're not really an aphrodisiac). Their slimy boneless structure hardly calling out images of lust and romance.

Butea Superba is one 'aphrodisiac' that breaks that rule. From the deciduous forested area of Thailand, this vividly coloured plant boasts yellow flowers so loud and lurid that they practically scream exotic eroticism. The plant winds itself suggestively around trees bearing masses of blooms that range from a burnt yellowish-orange to a striking, suggestive red.

But its power lies not in its eye-catching flora. Deep underground lies the root of the plant, its 'tubers', which is where most of the beneficial nutrients are. And it is these roots that have been the subject not just of Thai natives attention but of the world of men too.

Swanson Full Spectrum Butea Superba is a 'whole root powder' that contains the sterol compound beta-sitosterol, which is believed to act as a sexual stimulant to men in several ways.

What is Swanson Full Spectrum Butea Superba used for?

Butea Superba has been the subject of countless studies to date, all equally determined to uncover the secret to its vast range of physiological stimulants. What those studies have discovered is that the root is an incredibly rich source of phytonutrients. Including flavonoids, sterols, phytochemicals, and well over 15 other unique acids and components that affect our health.

Are you longing to restore your libido to its former glories? There comes a time when it happens to us all and there is no shame in accepting help. Let the ancient mystery and allure of Swanson Full Spectrum Butea Superba wash over you and be that help.

What is the recommended dosage of Swanson Full Spectrum Butea Superba?

To be used as a dietary supplement. Take one capsule a day with a glass of water.

WARNING: NOT SUITABLE ANYONE WHO IS PREGNANT OR NURSING

If you are already on other medication or suffer from any pre-existing conditions which you believe may contradict this supplement then ALWAYS seek advice from your doctor or health practitioner before taking.