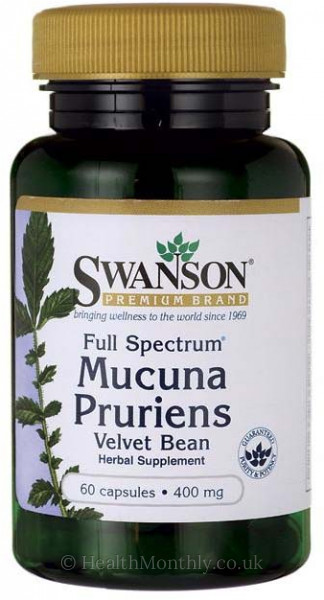 Bring the heat of the tropics into your bedroom with this Ayurvedic tonic for both men and women. Rumoured to have fuelled the fires of passion across the Asian subcontinent for centuries, the Red Velvet Bean holds the secret to longer, more intense love-making sessions.

Like so many of the best things in life, the secrets of Swanson Full Spectrum Mucuna Pruriens lie hidden beneath a rough and foreboding exterior. Also known as the Red Velvet Bean, this tropical legume is little more than the fruit of a shrub, indigenous to Africa and Asia.

Libido can dissipate for any number of reasons, some psychological, some physical. There is a tendency to allow ourselves to be stigmatised by loss of sexual appetite and it can leave us depressed, with feelings of substandard self worth. Our unwillingness to address this problem openly is understandable but this self perpetuating spiral of denial can lead us all to a tough place to get out of - fortunately Swanson Full Spectrum Mucuna Pruriens is here to offer quiet but vigorous help; able to return your sexual vitality to all its former glory.

The bean itself is notorious for its hairy, prickly exterior. Known as cow itch amongst livestock farmers because when ingested by cattle, it leaves their their tongues reddened and swollen. Surprisingly, it is that very form of self defence which, when treated properly (as it is here) can offer aphrodisiac powers that are unmatched in nature's medicine locker.

What is Swanson Full Spectrum Mucuna Pruriens used for?

Ayurvedic medicine has long offered us herbal remedies for the blue arts and it comes of no surprise to learn that in the Book of Ayurveda, the chapter labelled Vajikarana, features the Red Velvet Bean's secrets of aphrodisia quite prominently.

By transforming this aggressively defensive legume into a body ready, fully bioavailable nutraceutical, Swanson have turned the very agent which makes it so itchy to touch into its most powerful tool. As it turns out that itching agent is none other than the chemical neurotransmitter, Serotonin. The very same neurotransmitter that affords us all sensations of happiness.

Alongside the serotonin exists a chemical known as L-Dopa. L-Dopa (AKA Levodopa) is an amino acid which our body converts into another neurotransmitter - Dopamine. As well as offering peace of mind and general happiness, Dopamine is actually capable of disabling Prolactin - a protein enzyme inhibitor which is actually known to interfere with a healthy libido.

Studies have shown that when we introduce Mucuna Pruriens into our bodies it can not only improve sexual arousal (both mental and physical) but can even improve sexual stamina in men - meaning that you are not only able to enjoy a more active sex life, but a more meaningful and lengthy one too.

What is the recommended dosage of Swanson Full Spectrum Mucuna Pruriens?

To be used as a dietary supplement. Take one capsule once or twice per day with water.