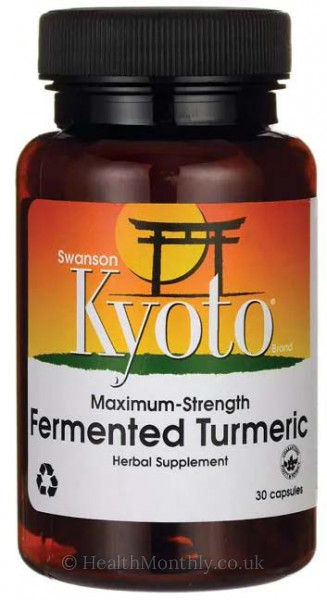 Utilising the ancient Japanese art of fermentation, Swanson have created a superior and chemical free way to extract the incredible antioxidant benefits from Turmeric. Also known as Curcumin, this is an amazing way to keep your liver and GI tract healthy.

If you've never actively used Turmeric before then there's a good chance that you enjoyed it without realising, especially if you enjoy curry!

Looking a little like Ginger (they come from the same family), Turmeric (Curcuma longa) comes from the root, or rhizome of the plant and has been primarily enjoyed as a culinary spice for centuries by Indian and Oriental cultures. Ordinarily, it is prepared by boiling, drying and then grinding down the root until it becomes that lurid yellow powder you may have seen on a spice rack.

In the case of Swanson Kyoto Maximum Strength Fermented Turmeric though, a slightly different system has been employed.

It is a time-honoured tradition in Japan to ferment certain foods in order to release their nutrients at their full potential. In the case of Swanson Kyoto Maximum Strength Fermented Turmeric, that process has been replicated, using a patented technique which uses lactic acid.

The fermentation not only neutralises the often overwhelming flavour and aroma of the turmeric but it also captures the phenomenally high concentrations of natural enzymes and antioxidant curcuminoids inside the root. In Japan, Fermented Turmeric has been used for centuries to support liver health and nourish the GI tract.

What is Swanson Kyoto Maximum Strength Fermented Turmeric used for?

So rare and perhaps misunderstood was Turmeric when it first showed up on the western shores that it was originally referred to as "Indian saffron" because of its golden colour and high monetary value. In much the same way, Turmeric was also used as food and clothing colourant (albeit a tasty one) before its nutritional gem was established.

On the other side of the world Turmeric has been used for over 4,000 years to treat a range of different health conditions. As both an active antioxidant and anti-inflammatory, it has been employed to combat infections and reduce inflammation all over the body.

Now you too can reap the many benefits of the antioxidant Curcumin.

What is the recommended dosage of Swanson Kyoto Maximum Strength Fermented Turmeric?

To be used as a dietary supplement. Just take one capsule a day with a glass of water.

WARNING: Not suitable for anyone who is pregnant or nursing. Be sure to consult your healthcare provider before use if you suffer from gallbladder problems. Stop using if you experience any gastrointestinal discomfort.

If you are already on other medication, pregnant or nursing or suffer from any pre-existing conditions which you believe may contradict this supplement then ALWAYS seek advice from your doctor or health practitioner before taking.