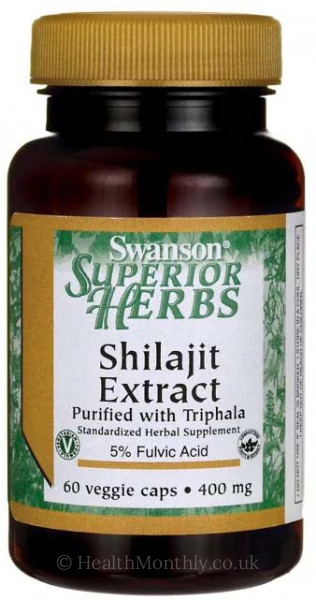 At the very epicentre of Ayurvedic tradition sits a black, tar like substance that has been revered and lauded in equal measure since the birth of this noble practice. That substance is Shilajit. Now you can enjoy its qualities as an unparalleled digestive aid and incredible source of minerals, vitamins and Fulvic Acid.

Shilajit is one of the rarest substances in this world. A substance whose true origins aren't completely understood. Found on the mountainous, rocky and uninhabitable terrain of the slopes of the Himalayas, this pitch black 'mineral oil' seeps out from the cracks in the ground, coaxed out by the heat from the sun.

At first a thick, sticky tar-like substance, it may not sound like the most appealing source of nutrition but once it has been purified using Triphala (an Ayurvedic formula consisting of three myrobalans: Amalaki, Haritaki and Bibhitaki) it represents one of mother nature's most amazing tonics.

Also known as Mineral Pitch, Mineral Wax, Brag-shun and Moomio, Shilajit has been reported to contain not less than 85 minerals in their ionic form. As well as humic acid, triterpenes and, perhaps most importantly fulvic acid.

Legend has it that when King Chandra-varma (of Northern India) reached the end of his long and triumphant reign and passed the age of 60, he decided that he wanted to enjoy his final years. Realising that he had exhausted all his youthful energy ruling his kingdom, the King became upset that he could no longer enjoy the natural pleasures of life, even with his enormous wealth and power.

He embarked on a penance to the Himalayan mountains where he prayed to Lord Shiva, the Hindu god. Shiva, pleased by his prayer, offered the King a substance from his own body that revitalised King Chandra-varma's youthfulness.

That substance was, of course, Shilajit.

What is Swanson Superior Herbs Shilajit Extract used for?

When you consider just how many different primary active ingredients there are in Swanson Superior Herbs Shilajit Extract, it becomes less of a mystery as to why it has been so heralded for such a long time.

With Fulvic acid chief amongst them, arguably Shilajit's greatest area of strength is in our digestive tract. Across the world, there is already an established correlation between the quality of the soil in which food is grown and its Fulvic acid content and many mass produced foods suffer from lowered ratios.

What is the recommended dosage of Swanson Superior Herbs Shilajit Extract?

To be used as a dietary supplement. Take one vegetable capsule a day with a glass of water.

WARNING: Not suitable for anyone who is pregnant or nursing.

If you are already on other medication, pregnant or nursing or suffer from any pre-existing conditions which you believe may contradict this supplement then ALWAYS seek advice from your doctor or health practitioner before taking.