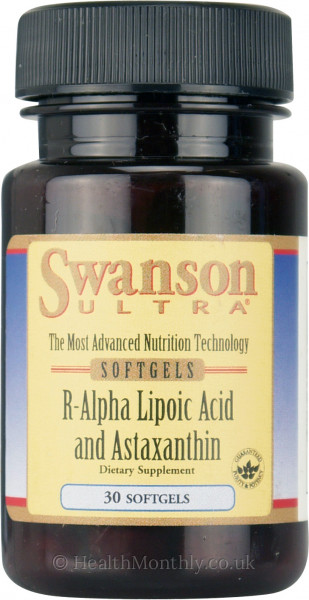 Astaxanthin and alpha-lipoic acid are widely recognised as among the most effective antioxidants available. But they have more specific and profound benefits as well.

Astaxanthin is a carotenoid nutrient found in microalgae, yeast, salmon, trout and some shellfish. It's the red you see in salmon and lobster. Alpha-lipoic acid is an organic compound produced in the body and found in foods like organ meats and certain vegetables like broccoli and spinach.

Unlike many other antioxidant nutrients, both alpha-lipoic acid and astaxanthin have the ability to cross the blood brain barrier to directly nourish brain tissue. Emerging research suggests that both may provide valuable protection for the brain and its cognitive functions. Astaxanthin is incorporated into cellular membranes, where it helps defend against invasion by potentially harmful molecules. Alpha-lipoic acid has been shown to help stabilise cognitive functions.

Together, alpha-lipoic acid and astaxanthin offer a multifunctional dietary approach for mental defense. Individual supplements are easy to find, but only Swanson Ultra(R) R-Alpha Lipoic Acid and Astaxanthin combines these two special nutrients in one easy daily supplement. Swanson's new combination delivers effective levels of each for optimum mental nourishment, with 50mg of Bio-Enhanced(R) Na-RALA-a stabilised form of alpha-lipoic acid with superior bioavailability compared to other forms-and a generous 6mg of natural, algae-derived astaxanthin in maximum-absorption softgels.