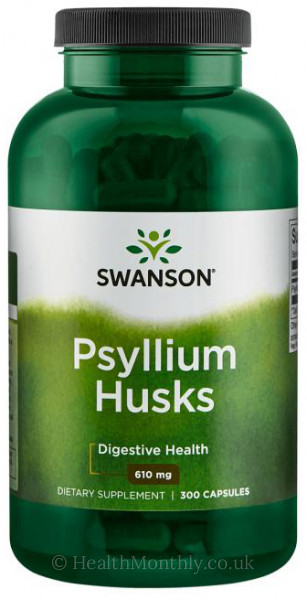 Cleanse your colon with these high-fibre, naturally occurring seed husks. Swanson Psyllium Husks act as a swift and effective solution to bowel irregularity and have even been proven to decrease the effects of coronary heart disease. An ancient yet still highly potent tonic, Swanson Psyllium Husks will ease bowel problems when used as part of a diet low in saturated fats.

What are Swanson Psyllium Husks?

Originating from Pakistan and India, Swanson Psyllium Husks are seeds from the native Plantago Ovata. Also known as Ispaghula or Isabgol, this indigestible seed has been used as a prominent source of fibre in many people's diets for centuries.

It is for this reason that we strongly urge you to try adding this spongy fibre to your diet to ensure bowel regularity as part of a low in saturated fat health program.

What are Swanson Psyllium Husks used for?

To explain their benefits, it is important to understand just how Swanson Psyllium Husks work as an aid to your daily bowel movements.

When you consume the seeds your body will, for the most part, not be able to digest Swanson Psyllium Husks. Instead, the husks themselves act as a sort of bulking agent in your stools. It is by increasing the mass of your stools and allowing for a higher level of water retention that your bowels will, in turn, be forced to move. It is through this movement that the body can enjoy a simple solution to constipation and even Irritable Bowel Syndrome.

But the benefits don't stop there. Aside from just helping with bowel conditions, Swanson Psyllium Husks has also been noted for their effect on the maintenance of the cardiovascular system.

Initially just thought to be a useful aid in the battle against high cholesterol, they are now known to have a direct effect on those suffering from Coronary Heart Disease. So much so that the FDA was forced to release a report officially establishing a link between the use of Psyllium Husks and a decreased risk of the disease.