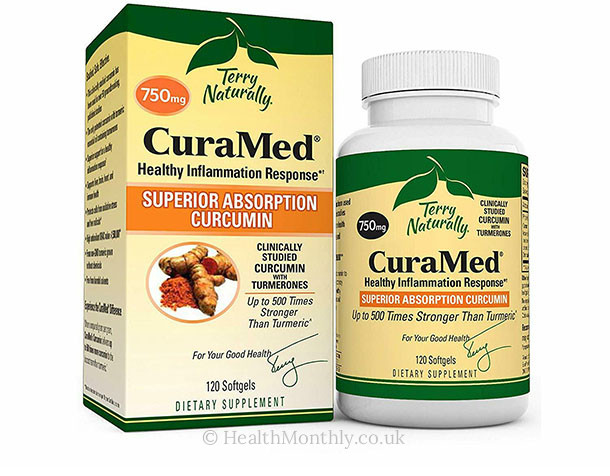 This high-potency formula provides superior support for a healthy inflammation response, a healthy immune and cardiovascular system, and resistance to free radical activity.

A patent-protected method using micronized curcumin, turmeric essential oil, and phospholipids ensures that CuraMed(R) delivers a curcumin that is up to 10 times better absorbed than standard curcumin, as well as having an 8-12 hour retention time in the body.

While the health benefits of curcumin, the active compound from the Indian spice known as turmeric, have been well-documented, it is also well-known that curcumin is not well-absorbed when taken orally (by mouth). Different methods have been used to increase absorption, including combining curcumin with lecithin or piperine (black pepper). The best absorption has been achieved when micronized (very small particles) curcumin is combined with turmeric oils and phospholipids. This combination is up to 10 times better absorbed than standard curcumin.

Curcumin, a compound found in the spice turmeric, supports multiple pathways in the body and is a potent antioxidant. Some of the benefits associated with curcumin include immune system modulation, protection from oxidative stress, and support for a healthy inflammation response. The specialised extract in this formula has the highest absorption of any curcumin extract available for maximum health benefits.

Where is the LOVE button.

Been taking CuraMed for 3 years now, and mainly because I had two cases of MRSA in my home and it would have killed me, plus I have cushings, Fibromyalgia , MS and a host of other issues with no immunity.

Thanks to CuraMed, and I know this, I did not expect to have all my pain relieved from Fibro, two blow rotator cuffs and general fatigue. Its like I woke up from a fog and noticed I didn't hurt anymore!!! Now I got to tell you, THIS IS NOTHING SHY OF A MIRACLE! I don't remember when I didn't have pain in my life. So when I say I own my life to this product, which in my research is the best on the market, and even though its expensive for me whose on disability, its pure gold, and I will sacrifice to get it.

Thank you Debra and Terry....you saved my life and I haven't stopped raving about this product to everyone on my MS and Fibro blogs and facebook pages or to every who needs help. This is the answer, plain and simple!!!

Terry Naturally has been a mainstay of the supplement industry of the United States. They revolutionised the industry by introducing botanical standardisation which mostly contain a variety of active ingredients for ensuring that consumers get the “most bang for their buck”. Learn more about Terry Naturally.