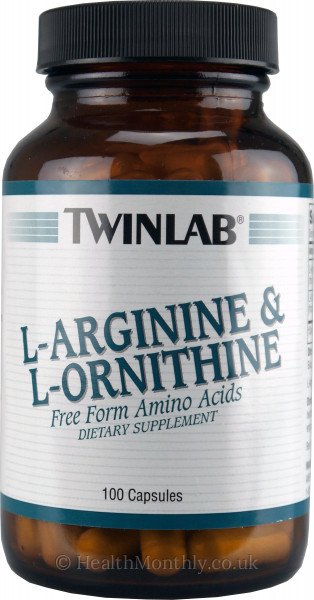 The amino acid arginine has several roles in the body, such as assisting in wound healing, helping remove excess ammonia from the body, stimulating immune function, and promoting secretion of several hormones, including glucagon, insulin, and growth hormone.

Where is Arginine found?

Dairy, meat and poultry, and fish are good sources of arginine. Nuts and chocolate also contain significant amounts of this amino acid.

The Importance of Ornithine:

L-Ornithine is one of the products of the action of the enzyme arginase on L-arginine, creating urea. Therefore, ornithine is a central part of the urea cycle, which allows for the disposal of excess nitrogen. Ornithine is recycled and, in a manner, is a catalyst. First, ammonia is converted into carbamoyl phosphate (phosphate-CONH2), which creates one half of urea. Ornithine is converted into a urea derivative at the d (terminal) nitrogen by carbamoyl phosphate. Another nitrogen is added from aspartate, producing the denitrogenated fumarate, and the resulting arginine (a guanidinium compound) is hydrolysed back to ornithine, producing urea. The nitrogens of urea come from the ammonia and aspartate, and the nitrogen in ornithine remains intact.

Twinlab’s creative innovation has always been ahead of its customers. It is a major reason why they have been able to maintain their standards for more than fifty years. The company only sources the most potent of ingredients, even if it means getting them from different areas of the world.